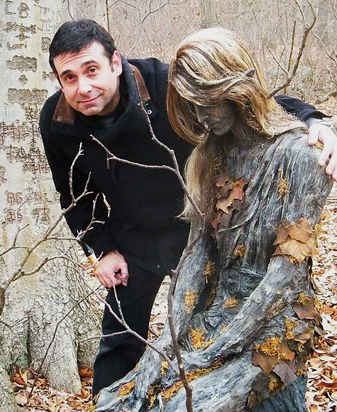 As a lifelong fan of ancient myths and cultures, it was both a rare pleasure and significant challenge to bring The Fay to the screen, especially after having been away from directing narrative films for many years. The goal of the The Fay was essentially to bring a pre-Raphaelite painting to life – that is, to make a film that looks like, or invokes, the timeless beauty and drama of pre-Raphaelite paintings. As those familiar with that Victorian school of painting well know, the pre-Raphaelites drew from ancient Celtic and Arthurian themes; and our film is no exception. It is a true medieval fable; a tale of courtly love, told with almost no dialogue, and so heavily reliant on both the strength of our actors (most especially the incomparable Sarah von Ouhl, who plays our title character) and the film’s exquisite cinematography. For many years, I’ve worked with cinematographers Gerardo Puglia and Leon Sanginiti, and nearly everything they ever shot for me (mostly pharmaceutical and tech pieces) always called to mind the delicate, pastel nuances of the pre-Raphaelites. So, in many ways, The Fay is my tribute to their work – a drama to showcase the brilliance of their cinematography. In addition, I think the film’s production design is quite ambitious and remarkable, thanks especially to the multi-talented David Deneen (who produced our special makeup effects, and wore a number of other creative hats), costume designer Melissa Diaz, and rest of our art department, which did its utmost (with very limited resources) to bring my designs into being.

As a story, The Fay is both very simple and unique – drawing inspiration from a myriad of Arthurian romances, in which ostensibly virtuous knights find themselves involved in problematic love affairs with “fays” – that is, “fairies,” “nymphs,” “nature spirits,” ...call them what you will. In medieval times, and even to this day in places like Ireland and Brittany, it was commonly believed that such magical beings (“fairy folk”) still haunt forests and other remote corners of the earth. In this, as in the Arthurian romances, our film represents a clash of cultures between the courtly, Christian world of medieval France (personified by our Knight) and the much older, elemental, Celtic culture of pre- Roman Gaul (personified by the Fay herself). So, throughout The Fay, you might notice numerous references to both Christian and ancient pagan themes. Avid film lovers may also be amused by various nods to classic films that define this genre, from Robert Bresson’s Lancelot du Lac to Monty Python and the Holy Grail, which we have scattered throughout the film. Overall, it’s my sincere hope that our film will entertain, touch, and inspire modern romantics, just as its literary predecessors touched and inspired their audiences in the medieval courts.